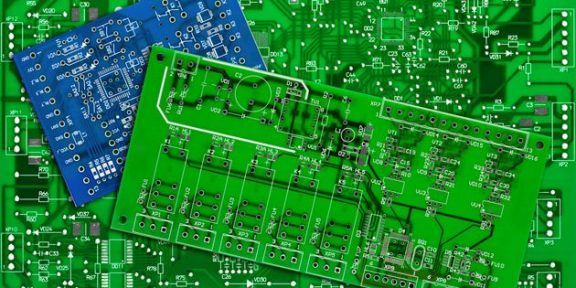 What is Electrodeposition Photoresist?

At Rush PCB, we are always at the forefront of technologies for the development of printed circuit boards (PCBs). This involves facing numerous challenges such as improving the density of PCBs, miniaturizing them, and searching of ways to make them suitable for the high speeds our customers want. All this means we must explore beyond the traditional methods of manufacturing technology to meet the newer requirements for these PCBs.

Traditional double-sided PCB manufacturing begins with blanking the copper clad laminate and cleaning the copper surface. The fabricator then drills the board according to the drilling information in the Gerber files, and plating the entire panel to create plated through holes. The fabricator then coats both copper surfaces with a photoresist, covers them with negative patterns of the traces, and exposes the board to a specific wavelength range of UV light. This helps to polymerize the exposed photoresist.

In the next stage, the fabricator strips off the hard resist layer and removes the exposed copper by etching. He/she then removes the tin layer, exposing and retaining only the required copper traces. The rest of the process then follows, namely, solder mask printing and surface treatment.

The major disadvantage of the traditional methods of PCB manufacturing is they do not allow fabrication of very thin and closely spaced traces as modern PCBs demand. It is difficult for the fabricator to control the etching process to create evenly spaced traces when the trace and space width is below a certain level. For instance, Rush PCB makes High Density Interconnect (HDI) boards with trace widths and spacing of less than 100 µm, which is very difficult to achieve by the traditional methods of PCB manufacturing. For making HDI boards, Rush PCB uses modern techniques such as electrodeposition photoresist.

Electrodeposition is a popular electrochemical process that the industry uses to coat a substance with another material. To form the patterned traces on a PCB, Rush PCB electroplates copper into micro-cavities on HDI circuit boards.

The fabricator at Rush PCB begins the process by coating the laminate with a thin layer of copper seed layer. Next, the surface of the PCB undergoes a coating with a photoresist using the photolithography technique. The fabricator then exposes the resist to ultraviolet light through a patterned photomask and dissolves the exposed areas. This results in a patterned insulating film on the PCB surface exposing the seed layer on the bottom of the pattern.

The fabricator then subjects the PCB to an electroplating process by submerging it into an electroplating bath using copper anodes. As the seed layer is the cathode, passing an electric current through the system results in copper depositing on the seed layer. The thickness of the deposited layer depends on the current density at various positions on the seed layer over time. This way, solid copper fills the cavities in the patterned photoresist, while the fabricator maintains the plating rate by controlling the current density.

After the board attains the requisite thickness of copper, the fabricator strips away the remaining photoresist and etches away the thin seed layer to isolate the plated copper traces from each other.

Rush PCB has made several improvements to the above technique to optimize the process so that it is comparable or cheaper than the regular process when making HDI boards.

For example, the current density is usually higher at the edges of the board, resulting in unacceptable plating thickness variation along the surface. Rush PCB uses an insulating shield with an opening positioned between the anodes and the PCB within the electroplating bath. Optimizing the size of the opening and judiciously placing the shield in the bath results in a plating with uniform thickness. Rush PCB uses simulations to minimize the thickness variation of the plating across the PCB.

Using simulation along with a dummy aperture before the actual process of electrodeposition allows minimizing the manufacturing costs by optimizing the process for the best results. This helps Rush PCB run the actual process at the highest possible rate, while still achieving the necessary thickness specifications.

By using electrodeposition photoresist technique for making HDI boards, Rush PCB gains several advantages. Some of these are:

Rush PCB is a pioneer in the electronic industry, making different types of high-density boards, suitable for applications in high-technology fields such as medical and aerospace.

Visit Rush PCB website, or call for a quick quote for all your PCB requirements now.