PCB Vias and Everything You Need to Know About Them

Looking at a complicated Printed Circuit Board (PCB) such as the motherboard of a computer, you are likely to find several tracks going nowhere, and terminated rather abruptly. However, a closer inspection, preferably with a magnifying glass, will reveal more details at the point of termination of the track. Most likely, you will see it ending in a small PCB pad, not much larger than the width of the track itself, with or without a hole in its center.

In reality, the track does not terminate, but rather continues to travel, albeit on a different layer, hidden under the outermost layer of the PCB. The pad at its end is actually a small pipe through the insulating material, electrically connecting the two parts of the track. In PCB terminology, such an arrangement that allows tracks to continue, but on a different layer, are known as a PCB vias.

Types of Via in PCB

Multilayer PCBs use different types of vias for various purposes. There might be through-hole vias, blind vias, and buried vias in the same PCB. Although the construction of all vias is same, their nomenclature depends on the layers of origin and termination. 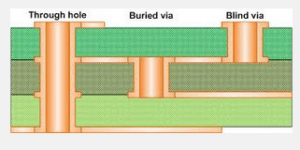 For instance, a via originating from the outermost layer, traveling through the board, and terminating at the other outermost layer is a through-hole via. In its passage through the layers of the board, it may or may not connect to intermediate layers, depending on the necessity of the electrical circuit.

A blind via originates from one of the outermost layers, but terminates on an intermediate layer, and therefore, is visible only on the originating layer. It may or may not connect to other layers in between.

A buried via is not visible from either of the outermost layers, as it originates in one of the inner layers and terminates in another inner layer, possibly connecting other layers in between.

Construction of a Via 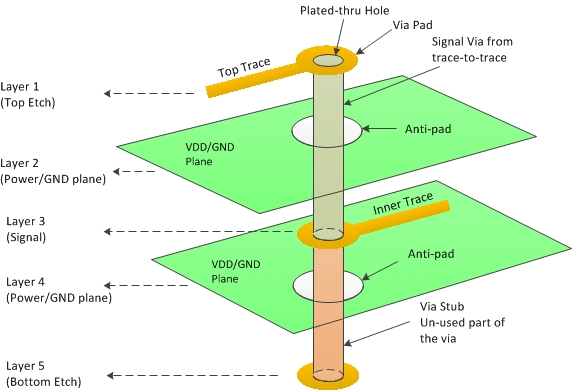 Fig.4: Construction of a Via

While the two outer pads and antipads are part of the layout pattern a fabricator etches onto the PCB, an electrode position process forms the copper tube connecting the two. Although in regular multilayer PCBs, you may find through-hole vias, these are less likely in high density interconnect or HDI boards.

Difference Between Plated Through Hole and Via

Another advantage with vias in multi layer PCBs is, the designer can either stack or stagger them to suit the requirements of the circuit layout, while he or she cannot do that with a through-hole. Therefore, vias help in increasing the layout density of a board, allowing the designer to reduce the size of and/or number of layers on a multilayer PCB.

The designer may decide to fill the vias in the PCB during manufacturing. While blind vias require filling to avoid surface dimpling, some designers may specify an additional epoxy filling after lamination to maintain better surface flatness.

You can ask your PCB fabricator to fill the vias with either epoxy or metal epoxy. The choice between epoxy and metal epoxy is that the latter is conductive. Therefore, if you have designed the via with a thermal application in mind, for instance, to disperse heat from one side to the other, filling the via with metal epoxy will be a better choice as opposed to epoxy filling of the non-conductive type. As its barrel always has a layer of copper, a via always retains electrical continuity, regardless of whether the filling is conductive or not.

In highly dense PCBs, especially those with fine-pitch components such as BGA, fabricators fill PCB vias with epoxy and planarize them to make them flat. Flash plating over them makes them perfectly flat and suitable for mounting BGAs.

Other applications may need a Faraday shield on one side of a chip, which could double as a heat sink as well. Stitching the underside of the chip with vias is a standard practice, while filling them up with a conductive epoxy fill, helps in the heat conduction.

When concerned with EMI, you may use multiple vias in the region of a ground strap, filling them up to provide a conductive wall. An impedance-controlled structure may also benefit from closely spaced and filled vias on either side.

Although you will find warnings about placing vias within pads as these can siphon off solder paste while soldering, leaving the joint devoid of solder, you may not have much choice when designing with very closely pitched BGA packages. The space available around the pads may not be adequate for a dog bone, and the only option may be a via in the SMT pad, or partially in it.

You can get over the solder siphoning by having the via epoxy filled, flattened, and plated to encapsulate it. The other side of the PCB via may not be important enough and you can wall it off with a mask.

Sometimes, to attain very high routing densities, it may be necessary for the designer to use landless vias. The trace directly enters the hole without a PCB pad. As the vias do not have PCB pads, the designer can pack in more traces in between adjacent vias.

Even after using blind and buried vias, you may still not have enough room for proper routing. In such circumstances, you may consider using laser drilled micro vias and or stacked vias. The two major benefits of laser drilling are extremely fine holes (sub 0.004”), and excellent registration. Both are obvious benefits for very dense parts. 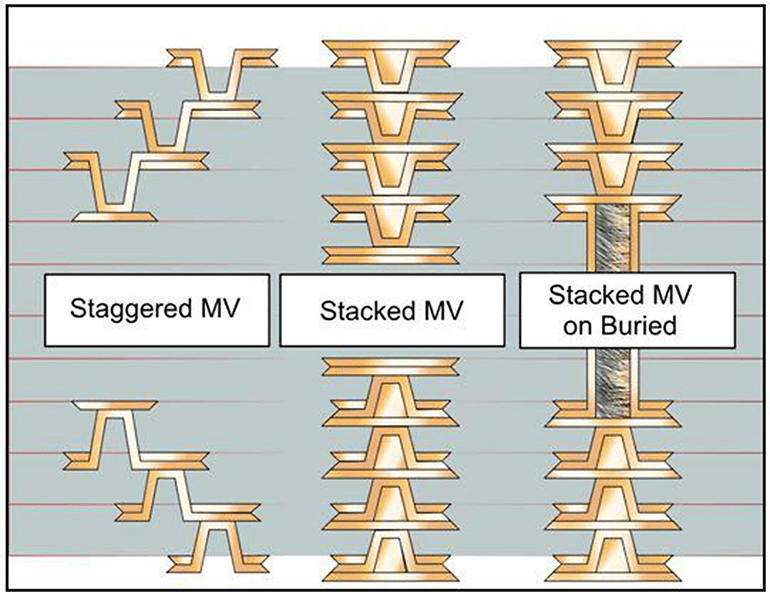 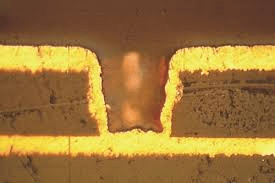 For stacked vias, designers place laser drilled vias directly on top of each other. However, designers typically use stacked vias only when board real estate is at a premium.

Just as people do, electrical signals too find it much easier to take a direct route when traveling from point A to point B. A via in the signal path forces the signal to take a detour, and the signal integrity suffers as a result.

For high-speed signals, there is also the challenge of via stubs. For instance, a via taking a trace from L1 to L3, may leave a stub down to L16. A high-speed signal will typically traverse all the way from L1 to L16 before reflecting to L3. This will attenuate the signal, as the effective electrical stub length will be almost double its mechanical length. Designers of thick boards take care of the problem by removing the unnecessary part of the barrel by back drilling. HDI boards do not face this problem, as they use laser drilled micro vias and stack them up to the desired layer.

The above types of via in PCB can increase density and bring down the cost in volume production. Laser drilled PCB vias can increase multilayer density and reduce layer count, without reducing the trace width or trace spacing.