Past and future trends in PCB design 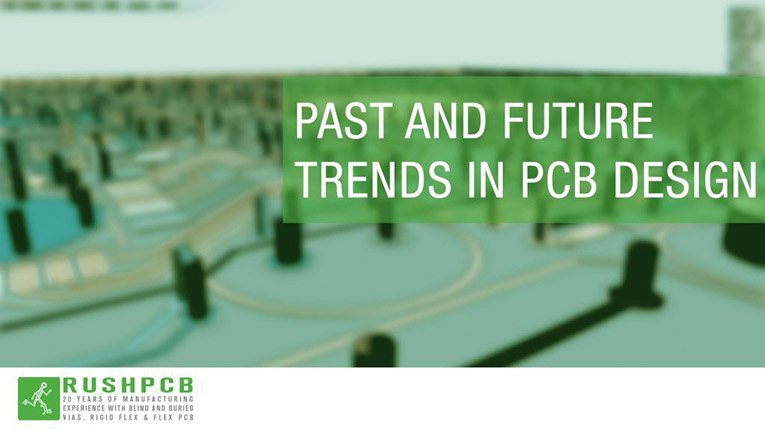 Past and future trends in PCB design

Over the years, Printed Circuit Boards (PCBs) have witnessed significant changes in assembly, design, manufacturing and prototyping.  The design of PCBs is critical to their performance especially in complex devices. With over 20 years’ experience in the PCB industry, we have experienced some of these changes which can be attributed to the changes in technology and the introduction of better and much efficient simulation softwares like Eagle and CAD. Consequently, we decided to share with you some of the changes that have taken place in the PCB industry especially for the design section over the years and the anticipated future changes and improvements in PCB design. Please join us in our discussion. You can also learn more about PCBs and their design from our blog.

To begin with, PCB design can be traced back to the era where only single-sided boards with no surface mount components were used. In the late ‘70s, most boards were designed using tapes to represent pads and traces. The Mylar sheet was used as the Printed Circuit Board and they were designed at a 4:1 scale. In the ‘80s, the double-sided boards which lacked the SMT (Surface Mounted Technology) and whose second sides were made of copper not components were introduced in the market. Double sided boards were also designed on the Mylar sheets using a blue tape on one side and a red one for the other side. The finished tape was usually photographed at a scale of 1:4 to produce a film negative with a scale 1:1. The negative would then be projected onto a board coated with a photo-resistor and then develop to reveal the design. Moreover, two types of films were used for the double sided boards; the orthochromatic film which was usually blind to red thus used to record blue traces only. Equally important, the panchromatic film which was less sensitive to blue was used to record red traces after filtration. The blue and red traces, therefore, allow 2 negatives to be produced and helped in ensuring that there is an exact alignment of vias and pads.

A different PCB design method also existed during the same era. Although not as popular as the tape and Mylar, this method used a material known as Rubylith which was polyester covered with a red plastic laminate. Design of such boards involved the use of an X-Acto knife for removing the red where pads and traces would be. The negatives were then used to produce a board on the photoresisor-coated blanks. Different from that, the CAD systems, though rarely used were also introduced during this era. This was also marked with the introduction of the SMT thus PCB design was made much simpler. Consequently, an explosion of different types of packages began to appear in the market. One such package is the BGA package which led to a massive increase in multilayer boards meaning that boards could now be packed with components thus they became more functional and smaller.

Many changes have taken place in the PCB design process especially from 1994. This is due to the introduction of more efficient PCB design software and the TLA program. In the curve, one can clearly notice that the highlighted red line representing the number of leads per square inch is so steep and remains in the same state even up-to-date.

Surprisingly, the minimum trace width, a trend that appeared in the first decade has leveled out. The trace width’s minimum decreased by over 50% over the first 5 years but remained stable after that. The number of metal layers also had 2 growth spurts but leveled after that.
From the above discussion, it is clear that PCB design has improved over the years and a brighter future can be predicted owing to the fact that technological advancement is the order of the day in today’s society. To begin with, the reduction of the number of leads per part and the increasing ratio of active and passive components implies the integration of more and more functionality onto silicon with a performance criterion that demands higher numbers of capacitors and resistors for power and signal integrity. In the same token, the layer counts of Printed Circuit Boards have remained same over the last 5 years while the area of PCBs has dropped by 29% and the density increased by 25% which results to faster clock rates hence higher currents thus boosting stray capacitance. This implies that lesser PCBs but high efficient ones due to high heat dissipation rates shall be introduced in the market soon.
Different from that, PCB miniaturization and increase in PCB density implies that components benefit from large scale integration hence the component count on the boards reduces significantly. Moreover, the size of components is reducing each day thus the clock speeds increase leading to generation of more heat thus special mounting requirements for chips will be one of the major strides expected to be introduced in the market soon with both electrical and mechanical engineering designers working together. This is because thermal issues are both electrical in terms of power losses and consumption and a mechanical problem in terms of the means of channeling the heat away from the components.
As if that is not enough, designers are currently designing circuit components like touch sensors on the PCBs to reduce their net cost. However, this design technique has the challenge when it comes to the creation and scaling of the complex shapes required for the implementation of components. A convergence of PCB functionality into FPGA (Field-Programmable Gate Arrays) which leads to lesser costs of PCBs and higher functionality is expected to dominate the market soon although this method has traditionally been used as the realm of specialist designers. Introducing it in the general markets helps in shifting economics in favor of programmable devices since it will replace the discrete 32-bit microcontroller and its associated peripheral chips. The future of PCB design is, therefore, very promising and designs will become complicated overtime.
With over 20 years of experience in delivering quality PCB prototypes, RUSH PCB is dedicated to improving the design, assembly and prototyping process from the design engineers to delivery. We lead the PCB industry with an on-time deliver rate of over 99%. Moreover, our technical support is readily available (24/7/365) and ready to provide you all the necessary assistance. Please try us today; visit us at https://www.rushpcb.co.uk/and place your quote today.